AROUND THE WORLD IN 80 COCKTAILS AND SKETCHES – NUMBER 20 – LE THANH TON, HCMC, VIETNAM.

Le Thanh Ton was emperor of Vietnam from 1460 until his death in 1497. He is generally regarded as one of the greatest emperors in the Vietnamese history and the Vietnamese people loved him. He cared deeply about introducing Confucian principles in his government and seeing that the land was in harmony through following the rituals. Le Thanh Ton toured the entire country in the year 1467, addressing local problems that he found, firing government officials and redistributing land that had been illegally taken. This made him very popular with the Vietnamese people. He also wrote poetry, some of which has survived. Le Thanh Ton tried to be and essentially succeeded in becoming a Confucian ruler: deeply concerned with good government and personal morality.

Modern day Le Thanh Ton street is a one-way street in HCMC and is one of the main routes into the Old Center from District 2 and the North. The area directly between Thai Van Lung and Le Thanh Ton was named recently and “Japan Town”.

Many small bars and boutique shops are found here catering to the needs of the Japanese factory workers that live there. Slowly, local residents have been leaving the area and relocating to districts outside the center to make way for massage parlors and late night bars catering to the transient Japanese community.

The cocktail that is inspired by the street Le Thanh Ton represents the Japanese influence there now. Served on a Zen garden, the cocktail is a sour style cocktail with cooling cucumber, wasabi, yaki nori seaweed, and is perfect as a pre-dinner aperitif.

This blog series called around the world in 80 cocktails and sketches is starting off in my home city of Ho Chi Minh City where I have been living for the last 10 years. The first 45 cocktails are taken from my second cocktail and recipe book called “Cocktail Art of Saigon drinks manual volume 2 ” and is a history, art, recipe and menu book for my Studio and private bar The Studio Saigon. The book is available directly from the studio and you can message me directly to buy your copy. 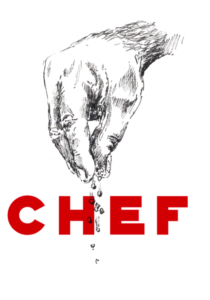 Richie Fawcett & The Art of Reinventing Himself | The Bureau